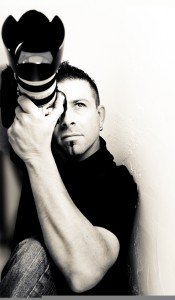 … So who is Joseph Cristina?

Joseph began studying in the visual arts at the age of 8 under his mentor, Marsha Nardini, an incredible commercial mural painter and installation artists with studios in New York City. She passed along practical, creative and intuitive knowledge which has greatly influenced his entire career. His reverence continues many years after her passing.

Photographically his 1st experience was in senior high with a beautiful c.1974 metal body 35mm Minolta SRT-102 which is still used for some of his fine art commissions. He continued his formal education at Florida Atlantic University and the Art Institute of Fort Lauderdale in the early 90’s. His first employment in the industry was with an advertising agency doing magazine paste-up, layout and cover work.

His career path deviated from the arts to the computer software industry when the opportunity arose to start his own business. While lucrative, this move stifled his creativity and motivated him to become a freelance photographer. As that business grew it gave him the ability to change career focus back to the arts and lead to the creation of his photography and multimedia studio, Allure Multimedia.

In addition to running a successful studio, he was bestowed the great honor of having his fine-art photography commissioned and displayed by the Venetian Art Society.

He’s educated tens of thousands of fellow photographers worldwide as the co-host of the popular internet TV and radio show The Digital Photography Cafe, with weekly discussions focusing on the art, business and current trends in photography and as of a year ago has included his own YouTube Channel into the mix.

As a photographer for over 20 years, Joseph found many products he’s used deficient and could be improved to make his work easier. With this in mind, Joseph began inventing products for himself and once perfected offered them to other photographers and videographers under the brand J.Cristina Photography Tool – J.Cristina, LLC.

Joseph is the inventor of the patent-pending Focus Pyramid, an auto-focus lens calibration tool used by many photo and video professionals around the world. The PRT – Photo Reference Tool for dialing in White Balance at the time of capture or in post-production and has just launch Aurora Camera Care a division of J.Cristina Photography Tools which specializes in the care of Camera Sensors, Lens and more. He continues to give back to the creative community by authoring educational eBooks and videos and creating software to assist fellow creative professionals.

From his roots in fine art and design to his many years of photographic experience, Joseph’s day-to-day collaborations produce content that moves and inspires while his many products help make dreams a reality.